Established in 2017, Solpod’s solar mounting systems are fully Australian made and manufactured. Solpods are solar photovoltaic panels, prefabricated into redeployable ‘pods.’  Solpods are suitable for commercial and industrial rooftops.

Working together, SEMMA and Australian Made will promote the locally made products of the South East region of Melbourne.  SEMMA, the South East Melbourne Manufacturers Alliance, considers the area to be ‘Australia’s most dynamic manufacturing region.’

‘Australian Made’ is recognised within Australia and globally as representing quality products, manufactured to the highest standards. Ben Lazaro, Chief Executive Officer of Australian Made, stated in Manufacturers’ Monthly:

“When you buy Australian Made products, you know what you are getting – products made to the highest of safety and manufacturing standards. At the same time, you are supporting Australian industry.”

Partnering Australian Made with SEMMA helps promote the products manufactured in Melbourne’s South East, within Australia and globally.

Solpod assembles solar panels into solar pods in the Dandenong factory.  Each Solpod is a folding and unfolding A-frame ‘pod’ of 10 solar PV panels.  Solpod’s system of prefabrication of solar panels into pods, saves on the time and labour usually involved in a standard solar installation.  Solpods are flat-packed, trucked from the factory, and craned into position. 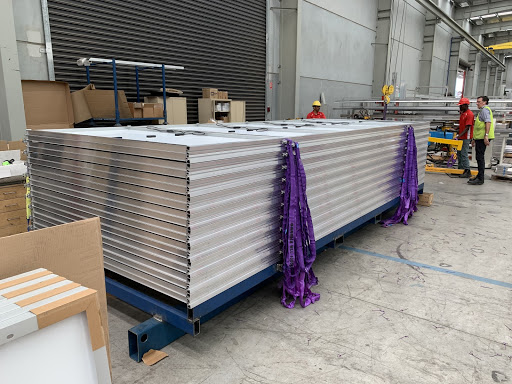 Solpod’s non-penetrating roof mounting solution means the solar pods can be removed without roof disturbance.  Competing solar products can require thousands of screws through the roofsheet, risking leaks, roof damage and the voiding of roof warranties.

Businesses looking for a shorter term commitment to solar can benefit from Solpod’s Rental.  Solpod allows businesses to access the benefits of solar with flexible planning cycles of less than 5 years.

Solpod’s solar mounting systems are proudly Australian made and manufactured.  Solpod’s innovation in industrialising the process of providing solar for business, has been listed in the prestigious 2020 Good Design Awards.

The partnership between SEMMA and Australian Made is expected to support the growth of locally manufactured products.  Read more about SEMMA’s partnership with Australia Made: https://www.manmonthly.com.au/news/semma-joins-forces-australian-made-support-local-manufacturing/

Find out more about SEMMA, which acts as representing body for ‘Australia’s industrial heartland.’

3 thoughts on “Solpod, Proudly Australian Made and Manufactured”